The Chemistry and Chemical Biology Department at Harvard University in Boston, Massachusetts, has been chillingly linked to the Wuhan University of Technology, which lies smack in the epicenter of the recent coronavirus pandemic.

The connection may be what prompted State Department officials to suddenly divert over 200 returning Americans from a civilian airport to a military Air Force base, for two weeks of quarantine. To add an extra dimension to all this spookiness, 210 passengers boarded the flight but only 201 were accounted for by The Alaska Department of Health and Social Services.

“This is not an accident or a coincidence. This is a small sample of China’s ongoing campaign to siphon off American technology and know-how for Chinese gain,” U.S. Attorney Andrew Lelling admitted at a news conference.

Wait. Stop right there. Did he just say that America is in the bio-weapons business?

Harvard University professor Dr. Charles Lieber, age 60, is the chair of Harvard’s Chemistry and Chemical Biology Department. He was arrested recently on charges of lying to authorities, but at the time, investigators didn’t connect the dots. He was charged with lying “about his affiliation with the Wuhan University of Technology (WUT) in China and a contract he had with a Chinese talent recruitment plan to attract high-level scientists to the country.” 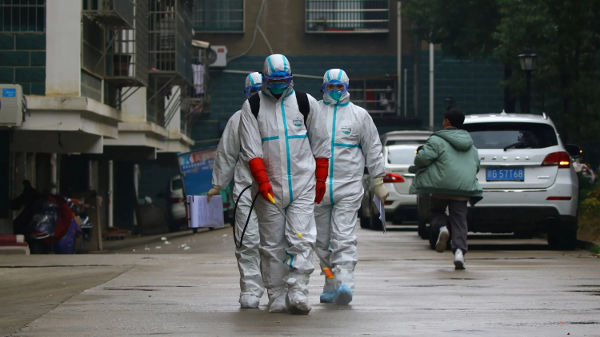 He was paid well by the Chinese, $50,000 per month. Under the table. He intentionally hid it from the government. A Chinese university also gave him “$1.5 million to establish a nanoscience research lab at WUT.” At the same time, court documents reveal, “Lieber’s research group at Harvard had received over $15 million in funding from the National Institutes of Health and the Department of Defense, which requires disclosing foreign financial conflicts of interests.”

Harvard acknowledges the charges are “extremely serious” and “is cooperating with federal authorities, including the National Institutes of Health.” So, that means they have some insight they might be able to pass along to help fight this thing? Interesting. Oh, by the way, “Professor Lieber has been placed on indefinite administrative leave,” their statement says.

Two related arrests that were unsealed on Tuesday connect even more dots. 29-year-old Yanqing Ye was charged with visa fraud, making false statements, conspiracy and being an unregistered agent. Yanqing had “falsely identified herself as a ‘student’ on her visa application and lied about her military service while she was employed as a scientific researcher at Boston University,” according to the indictment. In April of 2019, she admitted under interrogation that “she held the rank of lieutenant with the People’s Liberation Army.” She stands accused of “accessing U.S. military websites and sending U.S. documents and information to China.”

Just last week, Zaosong Zheng was “indicted for trying to smuggle 21 vials of biological material out of the U.S. to China and lying about it to federal investigators.” The 30-year-old, “whose entry was sponsored by Harvard University,” hid the bottles in his sock before he tried to hop a plane.

According to Lelling, the federal prosecutor, “Boston is a target for this kind of exploitation because of its universities, hospitals, research institutions and tech companies in the area.”

On Tuesday, A flight bringing the most vulnerable American citizens back to the U.S. had a sudden change of plans that caught the officials who expected to meet the plane off guard. It’s not clear why the “itinerary was changed from the civilian airport to a military base,” San Bernardino County commissioner Curt Hagman told reporters. They weren’t told until Tuesday night that the plane wouldn’t land there.

After leaving Wuhan, China, the State Department plane touched down late Tuesday night at Ted Stevens Anchorage International Airport in Alaska. There, they gassed the plane back up while they did “passenger screenings in Anchorage,” before leaving again for March Air Reserve Base near Riverside, California.

Alaskan officials are still scratching their heads trying to figure out what happened to nine people.

“In Alaska, officials conducted two additional health screenings after prior ones in China. All passengers were approved to continue on to California by the Centers for Disease Control and Prevention,” Alaska officials said.

As reported by CNN “The Alaska Department of Health and Social Services said officials conducted screenings on 201 passengers. Before the flight arrived in Alaska, the Centers for Disease Control and Prevention had said there were about 210 US citizens aboard the flight. It is not clear why the passenger counts from the state and federal agency differ.”

No matter how many were on the plane, all of them are stuck in quarantine for the duration. The Center for Disease Control says they’ll be “monitored for symptoms post-arrival.” One official told CNN that “the passengers may be forced to stay in isolation between three days and two weeks.”

Meanwhile, they’re setting up a command post and getting ready for a war. “authorities were setting up beds, phone chargers and televisions in an isolated, dormant hangar at Ontario International Airport,” Commissioner Hagman said.